In Sickness and In Health

When my mom asked me what I wanted for my birthday this month, all I could think about was a throat that didn’t hurt anymore and gums that weren’t swollen.

I had been in bed for six days, alternating between watching Netflix, reading, and sleeping. It hurt to talk, to swallow, even to chew. Visually, my throat implied a Jackson Pollock painting (if he painted with pus), and practically, felt as if someone had sewn a small wad of steel wool on my left tonsil. My gums resembled those of a boxer’s, after receiving several punches to the cheeks and teeth, and felt just as tender (or so I imagine – I have, thankfully, never been punched in the face). What are you doing to me, Body, I kept asking, and why?!?!

Compared to the average American – and I dare say, compared to most healthy Americans – I take exceptional care of my body. My doctor once told me that I had “the healthiest habits [she had] seen in… ever!” I eat copious amounts of fresh, organic vegetables, drink 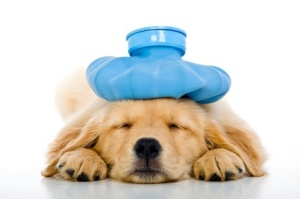 lots of water and a very moderate amount of alcohol, try to vary my proteins between legumes, nuts, eggs, dairy, and meats, and sleep a respectable 7-9 hours per night. I practice yoga asana at least three times per week, and pranayama daily. Between ultimate frisbee, biking, and running, I get at least 60 minutes of cardiovascular exercise anywhere from 3-6 days a week. And while there was a point in my life when I worried about food obsessively and exercised excessively, those days are (for the most part) gone; I am conscious and careful, but I no longer punish myself with a long run and negative self-talk after eating too much ice cream. After 31 years of work, I feel as though I am finally in harmony with my body: I feed it good things, I challenge it physically, and I appreciate what it can do on a regular basis.

Each time I get sick, however, it feels as if my body has betrayed me. For those days, weeks, or months, it seems not to matter what I do, or how I treat my body; I am at the mercy of whatever virus or bacteria has invaded. And despite my hippy, DIY-cure tendencies, I often find myself panicking, wondering if this is going to be it: She thought she had a cold/ the flu/ strep throat, but it was actually cancer, they would say at my funeral. If only she had gone to the doctor in time.

Morbid? Yes. Hypochondriacal? Probably. But that’s almost exactly what happened to my father.

In February 2002, five days after he started feeling dizzy and nauseated, my dad went to the doctor. The doctor diagnosed him with the flu and vertigo, gave him some anti-nausea medication, and sent him home. After he vomited several doses of the medication, he went back to the doctor to investigate further. The doctor then performed a CT scan. Nothing showed up. I don’t know if it was my mother’s prodding, my father’s curiosity, or the doctor’s lingering doubt, but someone decided that my father should get an MRI, just in case the CT scan didn’t pick something up. Sure enough, the MRI showed a large, unidentified mass in his cerebellum. Instead of being sent home, he was sent straight to Rochester General Hospital.

The same week my father was admitted to RGH, I came down with a wretched flu. While he was on the operating table, receiving a biopsy on his brain tumor, I was in bed with a 104 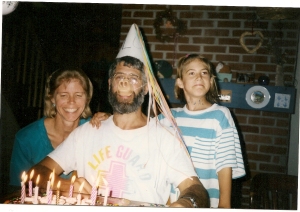 degree fever. My fever meant that I could not visit him after surgery; my general malaise meant that I had little energy or awareness of anything beyond my own discomfort. I remember sitting in the kitchen the first day I started feeling better, having the sudden realization that my father was dying, and had been dying quickly for the last few weeks. I remember feeling completely and utterly overwhelmed by helplessness – my father’s body was fading, and I could do absolutely nothing about it, not even visit for another 24 hours.

When I finally did visit, I was given a mask to wear over my nose and mouth, in case I was still contagious. I remember thinking the mask was pointless. The echos of my flu were powerless compared to the aggressive bundle of cancer cells in his brain. Couldn’t I just sit with my father, talk with him, smile with him, without a mask covering my face? The tumor had already decided its course; we were already at its mercy. Why were we still pretending we had control?

Compared to the average American – and indeed, compared to most healthy Americans – my father took exceptional care of his body. He hardly went to the doctor (he was hardly sick), he ate copious amounts of fresh, organic vegetables, drank lots of water and a very moderate amount of alcohol. He varied his proteins between legumes, nuts, eggs, dairy, and meats, and slept a respectable 6-8 hours per night. Between his rowing machine, ski machine, stationary bike, and running, he got at least 60 minutes of cardiovascular exercise anywhere from 3-6 days a week. Despite occasional frustrations with his aging muscles and creaking joints, he appeared in harmony with his body. He fed it good things, challenged it physically, and seemed to appreciate what it could do. But to his brain tumor, none of that mattered.

Sometimes I wonder if my obsessive tendencies are a response to my father’s premature death: if I couldn’t control that, then at least I can control what I eat, how much I exercise, and which direction the mug handles point when I put the dishes away. The ridiculous part about trying to control my life, however, is that while I can control the choices I make, I cannot control how those choices affect me or my body. I don’t know or understand everything that goes on underneath the skin, inside the organs (or even above the surface, for that matter!), therefore I cannot foresee how each of my choices manifests – physically or emotionally. All I can do is feel whatever it is I’m feeling, and try to figure out the connections between my choices and those feelings.

It’s easy to think that things are unfair, especially when we are in pain. But I did everything I was supposed to! we may find ourselves crying. Why did this happen?! Life is so unfair!! Perhaps when we dwell on “fairness,” however, we are missing the point. And perhaps when we dwell on our own pain, we are blinding ourselves to the pain others experience. To label our own misery as “unfair” implies that there is either someone else who is more deserving of misery, or that our misery is somehow more miserable than everyone else’s. Neither of these is particularly empathetic, and neither is helpful to rebuilding our health.

At some point during my recent sickness, a friend gently reminded me that “sensation is the only way our bodies can communicate with us.” If we feel pain, she said, that usually means that our body is begging us to listen, and listen deeply. When she said this, I felt a sudden wave of guilt for not loving my body fully – similar to the guilt that arises after I realize I said something mean or offensive to a person I love. Just as it is easy to love those people who are kind to us, it is easy to love our bodies when they respond the way we want them to. But just as we must choose kindness even (and especially) when others are not kind to us, we must be kind to our bodies even (and especially) when they make this kindness difficult. With all their imperfections and flaws, our bodies are ours to love, honor, and cherish, both in sickness and in health.

I am a professional yoga teacher, semipro improv comedian, amateur blogger, and aspiring English teacher. I am interested in all things healthy, most things funny, and nearly everything that involves words. View all posts by straightupyoga

One thought on “In Sickness and In Health”

There was an error retrieving images from Instagram. An attempt will be remade in a few minutes. 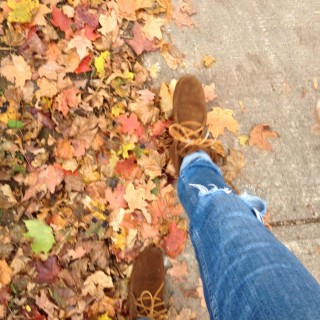 I am a professional yoga teacher, semipro improv comedian, amateur blogger, and aspiring English teacher. I am interested in all things healthy, most things funny, and nearly everything that involves words.